It Really Was A Good Idea! 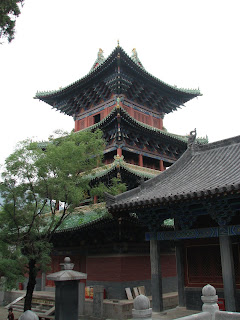 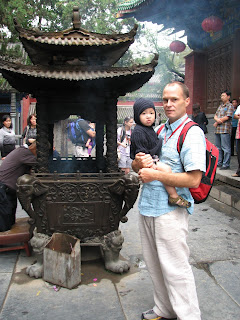 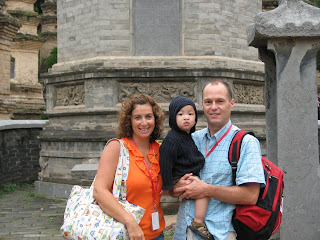 I commented in yesterday's blog that someone should remind me today that our 2 hour bus trip to the Shaolin Temple "seemed like a good idea at the time".  Well, in reality, it was a great idea at the time as it turned out to be a great experience.  Step way beyond the obvious and significant differences between the Christian faith and the Buddhist faith and you can really marvel in neat historical and cultural experience.  Here are some quick facts.  The temple is about 1,500 years old.  In its prime, there were 2,000 monks.  Now, there are about 300 monks.  Currently, there are more than 20,000 kung fu students on the grounds.  It is more accurate to say that such students are there for a private education that includes an emphasis on kung fu.  The architecture was phenomenal and the waft of incense added ambience--at least enough to cover the smell of cigarettes--remember not everyone there was a monk.  We attended a very entertaining show focused on the art of kung fu.  The students were all male and probably ranged in age from 8 to 18.  These guys were flexible, strong, and could probably do real damage to a human body.  They had some amazing skills (maybe tricks??), like throwing a nail through plate glass and bursting a balloon.  The highlight of the day was watching a few members from our group climb on stage before the show to have action poses taken with some of the students.  I thought about going up, but my knees and hips could not possibly make the required contortions.  I had a thorougly enjoyable experience and could bore you with pictures if you like.

The best part of the day was really seeing a little more of Mack's personality starting to peek through.  As you know, I hate hot, sweaty, uncomfortable environments like a 2 hour bus ride.  But, this did afford us the opportunity to hug/squeeze/tickle/comfort this guy into giggling and laughing a little.  He fell asleep in my lap for the last 45 minutes of the ride to the temple, and I then lugged him around while he slept another 15 minutes.  As I think about it, I pretty much lugged him around for most of the day--the kid ways a ton and my arms are aching tonight.  It was (and is) interesting walking around with some many other adoptive families.  We stick out like sore thumbs and get more attention than I seem to recall when we adopted Luke.  The bus ride home was uneventful--Mack was draped across our laps and pretty much slept the entire way home.  It was just nice to get to spend time with Mack and learn about him.  It is impossible to know, but I get the sense that he was the "protector" in his room of 10 at the orphanage.  Yesterday, as he interacted with some of the other adopted kids (and their siblings), he would share toys with the smaller/younger kids and linger near them.  He whacked the one 8 year old that encroached upon the little kid territory.  We have also noticed that when we walk our hallway at the hotel, that he will stop at the doors where children are crying.  I tend to think he is "worried" about them.  All of this is supposition, but there is clearly more personality within him than we have seen.  My theories will likely fly out the window when he pounds Luke or otherwise crushes someone in Sunday School.

Best scene of the day occurred at lunch.  One little guy that travelled with his family from the U.S. tried to indicate quietly to his parents (but loud enough for us to hear) that he had to go poop.  Now, in the Shaolin part of the woods, there are no Western toilets, only holes in the floor and slippery holes at that.  So, the quiet debate ensued between him mom and dad "Me or you, men's or women's, which one will be best?"  While that debate quietly continued, the little boy finally indicated, "Nope, I'm okay---I think it was just gas".  It was a classic moment enjoyed by everyone at the table--except maybe his mom and dad.

For those of you who wish we could see Maria's House of Hope, it just will not happen.  I can at least show you one photo of the fork in the road we could have taken (for another 1.5 hours) to get us in the vicinity.

We still cannot see your blog comments--although Shelby sometimes reads them to us on Skype.  Thanks for your support.