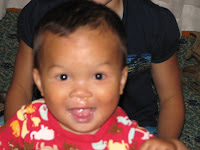 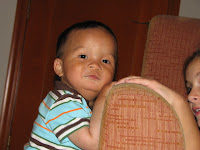 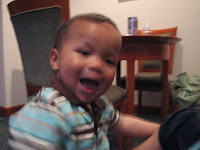 Well, we had a great first night with Luke. Luke went to bed around 9:00p.m. without a fuss. The rest of the family, except for me, turned in shortly thereafter. I stayed up till the wee hours tinkering with spreadsheets--which for me is a sick kind of therapy. Luke woke up once during the night, cried briefly until I was able to get him situated again with warmer covers, and then slept until 7:00a.m. So, again, a great first night. When he awoke, he was pretty reserved. I think he was just trying to get himself oriented to his new surroundings and new faces. He was pretty snuggly for most of the morning, especially when he had one of his two bottles for the day. The Nicholsons went down for breakfast while the Mortons slept in for a bit. Luke ate lots of food, probably because he did not eat much the first day with us. So, we were glad he had an appetite and shocked to see one of our kids eat vegetables and fruit with glee. We had no formal plans today. Because the weather was rainy and dreary, we just decided to stick close to the hotel and keep things simple. Our one excursion was a trip to the local department store. That is right, it was time to introduce him to our family tradition--SHOPPING! He handled the experience pretty well but never once said "I want this or will you buy me that?" So, unless he was saying it in Mandarin, he has a lot to learn about shopping as a Nicholson. There was lots of neat Olympic items, but we decided to wait awhile before purchasing. Cole did get a new jacket--think urban Chinese chic. That purchase was an experience because we were personally ushered through three different counters and six different staff, to an old mechanical "slide" credit card machine. So, in the end, the jacket will either be free because the purchase will never get recorded or it will cost about $600 USD because it got processed about 20 times. After shopping, we fed Luke lunch and put him down for an almost 3 hour nap. During that time, we all exercised and I watched Tiger win the US Open playoff. Again, because it was rainy out, we spent the afternoon playing cards and playing with Luke once he awoke from his nap. We did get to see more of his personality this afternoon. He can make his feelings known pretty clearly--when he is happy he is all smiles and laughter. Like most of us, he can turn-on-a-dime, cut his eyes, and let you know he is not happy. The best/worst moment of the day was when Melissa took his bottle to fill it with juice. He was deeply wounded by what was meant to be a kind act and promptly closed his eyes, opened up his lungs, and cried for about 10 minutes. So, quite a nice tantrum that was our best reminder of what it is like to have a toddler again. In all seriousness, it was a nice bonding moment for Luke and Melissa.

I do have to say that one of the great blessings and joys in the experience has been how well Cole, Shelby, and Piper are doing with Luke. They really do like Luke and are just doing wonderfully in their interactions with him. They play with him and work with him and hug him and talk to him and just love him more ways than I thought they would. There have even been fights over who would hold him, who would stroll him, who would carry his bag. If it lasts until we get home, I count myself a lucky man to have ever seen it at all. I will remind them of these moments when he is in their rooms destroying something, spilling something, interrupting something, etc.

And lastly, I can tell you we were able to finally get access to your comments from the last two days. For those interested, I will only discuss the problem one-on-one and with no cameras rolling. If you want to know what I know now and how I know it, then simply whisper "nitecruzr" the next time you see me. Otherwise, thank you all for your prayers and love and humor.