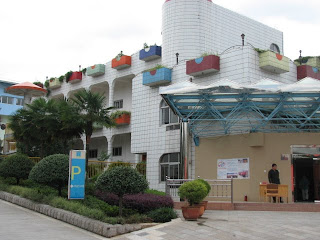 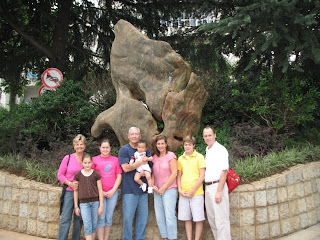 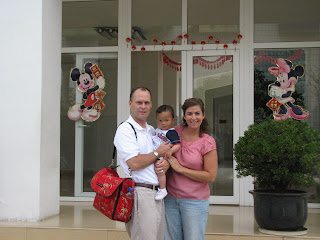 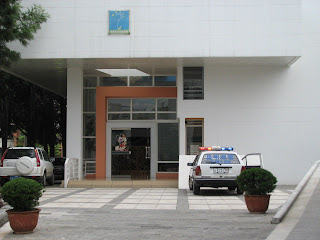 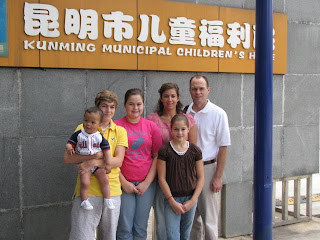 Hey everyone it's Missy. I know you are all used to Dave's entries, but for a couple reasons I wanted to write today's entry. First, Dave is in the bathtub soaking away some pretty intense cold symptoms. He hasn't been feeling well all day. Please say a little prayer! Secondly, there were so many questions about Luke in the comments I wanted to add my two cents.

I can't even tell you how we look forward to the comments. It is the first thing we do in the morning. Usually Piper and I go straight to the computer. Thank you for your encouragement and support. Even knowing this is where we are suppose to be and what we are suppose to do there can be alot of insecurities. With that said, back to the questions! As far as his little life goes, he is wearing the 12 month outfits, except for the shorts. I'm so glad I brought two pairs of 6-9 shorts. (Thanks Janet and Katie) He does feed himself off the tray of the high chair, but he also allows us to spoon feed him anything. He is eating great. As far as the cleft lip and palate go, his lip has been repaired since the pictures that we have at home. That was interesting to us. We thought it looked pretty good, but it is better now. The palate inside is interesting, everyone of us has had our chance to look at it, and it is hard to explain. He manages it so well I forget it is there. It is basically just open...not sure how else to explain it. We all have concluded it is not as bad as we thought it would be. He is babbling a lot. Not sure what language it is! We have heard Bye Bye and Ma. But, mostly rarararara and yayayayaya. He has alot of teeth. And he is also JUST learning how to walk. He stands in between the kids and takes about 10 steps. Precious.
Lastly, he has sooo much personality. In other words he is wild. Seriously he can turn on a dime. One minute cute smiling laughing the next wham he's mad as a hornet. But, really just alot of personality. Waves at everyone and is very loud. Hopefully that helps answer some of the questions. Can't wait to be with everyone again.

Piper says Hi from the other room!!!!

Well, this is now Dave and I am out of the tub. Please try to remove the visual from your mind--it makes me uncomfortable. We did tour the orphanage today. It really was a well-kept and well-run place. Very clean, very organized, and very efficient. We met with one of the adminstrative staff and she answered some basic questions. The orphanage that we visited was started in 1987 and was really a spin-off of a social institute that handled infants and adults. There is a staff of about 200 nannies/aunties that are the caregivers and a staff of about 75 that handles administration and medical clinic. Right now, they have about 600 children in their care, although only 100 are actually at the clinic, with the other 500 in foster care situations. We walked through one room that was a physical therapy area for older kids--there were three kids working in there--it made you glad to see they were receiving help. We then saw the room where newer babies, about six months or less, were being cared for. There were maybe ten in the room, all just finished with lunch, and being bathed and put down for a nap. There were cribs everywhere, but interestingly, they were napping them kind of side-by-side on one large mattress--Luke moved through this room probably a year ago. We were also saw the room for returning foster babies--again, Luke just flowed through this room. We did not get to see the third floor, which is where there are a lot more children, because the weather has been changing and I think they correlated that to disease risk. There were several older children that were moving relatively freely throughout the orphanage--one of whom was about an 8 year old girl with a deformed arm. She followed us for awhile and thought it was tremendously funny that most all of us had on sandals. If you look closely at one of the photos, it shows a police car at the building entrance. They had just brought in a child that had been abandoned. So, it was very interesting to see the cycle from the police drop-off to someone like the Nicholsons taking a child home.

helloooooo!!! it's cole... just wanted to say "hi". and thanks too all who commented, the first thing we do in the morning have dad work his magic on the computer, cuz we are uncapable, so we can read your comments. and Grace, your hilarious!!!.... thanx so much. and Trish, sorry, no luck with the sweaky shoes in kunming, maybe Guangzhou!!! ttyl, BYE!! :)
Posted by NCHLSN7 at 5:34 AM 12 comments: