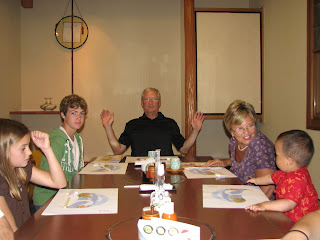 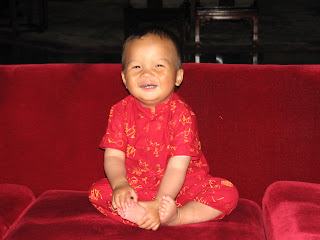 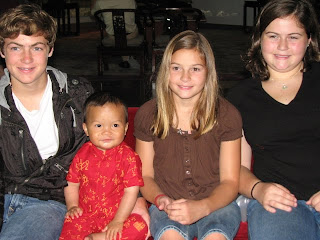 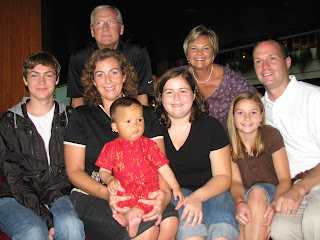 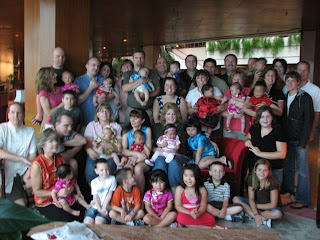 Well, it seems the days are getting lazier and lazier. The only push this morning was that I needed to be back in our room by 10:00a.m. to wait for any potential issues that might arise with Luke’s visa application. So, I ate a quick breakfast and came up. Melissa and the kids joined later. Cole, Piper, Melissa and I played hearts while Luke walked circles around the coffee/card table. Shelby finished reading another book—her fourth of the trip I think. We received a call at about 11:30 from Kathy, one of the agency reps here in Guangzhou. To her credit, she did her best to tell me that there was a “huge problem” with the visa application and that we would not be able travel home. Of course, she is laughing as she tells me this and says repeatedly under her breath “I just cannot do this joke well”. So, Luke is ours to take home and we go tomorrow to take an oath of citizenship. Cole has asked me “What is the oath and why do you take it?” Well, I do not know what it is and we take it because they say to. As I said before, this process is like buying a house—you sign where they tell you to sign and pay what they tell you to pay. After we got our good news, I went to ride the Lifecycle for about one hour. Something was wrong with the way I set the saddle height and my Achilles are both hurting—but that is enough of my whining. Shelby and I went out together for lunch while Cole napped Luke. Melissa and Piper went to exercise at the same time. It was a nice father-daughter time for Shelby and me. We of course had a thirty minute devotion, discussed her future career plans, the significance in finding meaningful relationships, the efficacy of a McCain/Rice ticket, and the impact of Bao Steel taking a 96% increase in iron ore costs from Rio Tonto. Actually, we mainly enjoyed stir-fried broccoli, onion rings, fettucine with ham and mushrooms, and Watson’s ginger ale. We are not deep.

We all got dressed-and-pressed for our 4:00 p.m. “red couch” pictures. This was done on the second floor of the hotel, on, you guessed it—a red couch. The first pictures taken were each adoptive family with their new child and current children. Each family was then photographed pretty much simultaneously, in blinding sequential flashes, by all the other adoptive families. You actually felt like rock stars. We did one series with just Melissa, me, and the kids. Then, there was a rising protests from all the other adoptive families that basically said “Bill and Linda came all this way—you better include them in some photos”. And so, we got round number two of flashes. After that picture, all of the babies were then placed on the couch for one large adoptive baby picture. This was nothing short of sheer chaos. There were moms and dads trying to get the attention of the children—as if they were all going to smile simultaneously. There were moms and dads sitting in front of the couch trying to keep them from falling off and/or from walking away. There were moms and dads literally sitting behind the couch, arms wrapped over the top of the couch, trying to prop babies up for the picture. It was awesome. We then did one picture of the entire group, with Kathy, Jason, Bill, and Linda busily shuffling from camera to camera to camera to make sure everybody got a photo.

After the picture session, we had about an hour and a half before dinner. Melissa and I did a little shopping while the kids watched Luke. We then proceeded to the 3rd floor to a very nice Japanese restaurant. Bill had worked us into a private room for just our family. It was a “leave your shoes at the door” Japanese experience where you basically sat on the floor surrounding a table that was actually submerged in a pit—almost to floor level. The food was very good. There was something called a steamed egg that seemed especially repugnant to most of us—except Luke and Bill. For Melissa, it was her “best meal of the trip”, as she enjoyed potato/beef croquets and grilled salmon. Cole, Linda, and Shelby all enjoyed tenderloin and fried rice. I had grilled beef in ginger with fried rice. Bill had something called sukiyaki—which was a meal prepared in a hot oil liquid right a the table. It consisted of Kobe beef , vegetables, and tofu. As an added treat, our delightful chef insisted that the right way to enjoy the meal was to dip everything she cooked into a fresh raw egg. Bill was quite the trooper and heartily dipped away. He suggested he was only partaking to give us all a show but secretly I think he was loving the experience. The miso soup was left untouched by almost everyone. Luke, who is a fabulous eater, ate about 3 plates of food from everyone else and loved being eye-to-eye with the rest of us (because of the submerged floor table). We conluded the meal with ice cream. Imagine me interpreting the flavors as stated by our very Chinese server. Well, burbary was clearly blueberry. Banirra was clearly vanilla. And I thought redba was clearly raspberry. So, Piper and I ordered banirra and loved the vanilla experience. Melissa ordered the burbary and thought it was the best blueberry she ever had. Shelby ordered the redba and was half-way through scoop one when she said “this is not raspberry”. We said, “Sure it is”, to which she said “Then taste it”. Well, as I finished the first scoop, I realized that what Shelby described as “a bean” was in point-of-fact a bean. It was a “red bean” like you would expect to find in “red bean ice cream”. I finished the “red bean” and gave Shelby the rest of my “banirra”.

After dinner, Piper and Shelby and I went to the hotel arcade for car racing, motor cycle racing, and air hockey. We must have knocked the air hock puck off the table a half dozen times—I am sure they were excited to see us leave. When we returned to the room there was yet another rousing game of hearts being played by Bill, Linda, Melissa and Cole. Bill seems to wax-and-wane between thinking the Japanese meal was a great experience and wondering if the raw egg is somehow creating a digestive problem. My bet says he is up all night.

Luke is in his late night routine. He walks around the room, kinda chanting, kinda laughing, and hiding in other parts of the room. When you “find” him, he squints his eyes, tilts his chin down, and lets out this deep belly laugh/grunt. He is having a big time.

Tomorrow is packing day. At the end of the day, around 3:00 p.m., Melissa, Luke, and I go to the U.S. Consulate (no bags, no cameras) to take “the oath” and receive Luke’s visa. If I can tell you more about it, then I will. If it is a matter of security, well, then I will not. Unless, of course, you mention “nitecruzr”.

Give us a minute to get pictures loaded.