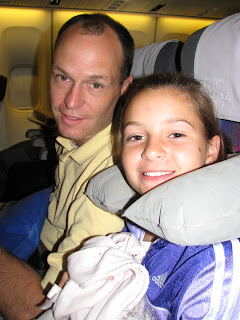 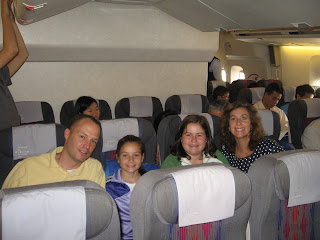 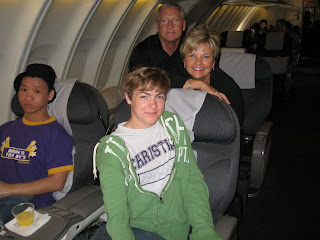 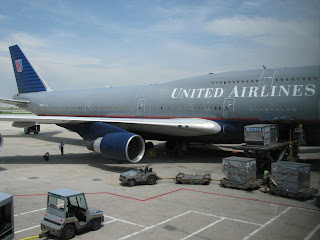 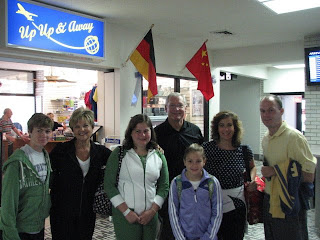 Well, we started our day Wednesday probably about 75% ready to leave. This was a good thing given that as much effort went into the remaining 25%. As we finally wound down preparations at around 11:00 pm that evening, Shelby came downstairs crying because her ear was bothering her. After my caring reponse induced more tears, it was time for a precauationary visit to the ER. Good thing, because she was diagnosed with infections in both the outer and middle ear. So, after a trip to Walgreen's, we were in bed by 2:00 a.m. Our travel day Thursday started early and our travel group (Dave, Melissa, Cole, Shelby, Piper, Bill and Linda) all met at the airport for our 9:27 flight. The picture for today was actually taken by Will, who was both driver and photgrapher for the morning. The flight to Chicago was uneventful and our flight to Hong Kong departed on-time. A few members of our group ended up in business class and after visiting with the pilots for awhile, and being otherwise pampered, did manage to wander down to the hull where the rest of us were busy flapping our arms keeping the plane in the air! The flight was uneventful until we got near Beijing, which seemed to stay on our GPS view for quite awhile. This was because our destination, Hong Kong, was having bad weather and we were being re-routed to Beijing to for a "brief stop" to take on fuel. Well, the "brief stop" turned into a four hour "pause" on the tarmac, doors shut, while things ultimately cleared in Hong Kong. I probably snapped at least once, or maybe six times, during the 20.5 hour flight that was supposed to be only 14.5 hrs. As you might guess, given our lack of sleep, things are only looking up at this point. With a scant 10 minutes left in the flight, during a brief moment of rest, I was awoken by the melodious voice of my wife exclaiming "Dave, Piper is puking!". Why I needed to know is still beyond me at this point, but I sacrificed a Barnes & Noble bag full of bike magazines to support the cause. Ultimately, we land, clear customs, get our bags, meet some great representatives from our agency, meet two other neat families using the same agency as we are, and ride the 45 minutes to our very nice hotel. Thankfully, the only thing that marked that bus ride was another round of Piper's dry heaving while Linda dutifully wiped her brow. And so, we are now in our hotel, with everyone slowly falling asleep while I drone on-and-on. Someone needs to give me some blog etiquette or this could become a novel. We really are having a blast and appreciate the prayers and the messages.

P.S. I have not referenced Cole in this note, but when I asked him about his time in business class, he did not say "Blah" but joyfully reported something about filet mignon and two containers of freshly toasted and roasted nuts. I just went back to flapping my arms.