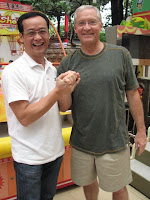 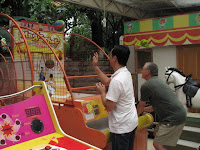 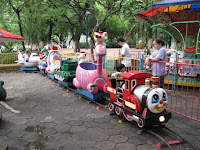 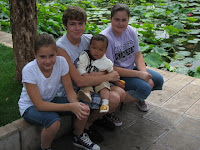 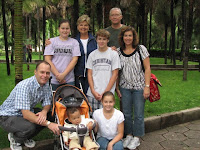 Well, just another day in China. Since it is all about Luke, I will tell you he slept from 9:00pm until 8:00am. Did not wake up once during the night. Now, remembering back to newborns, I will say that this 18 month old, already sleeping through the night thing, is a pretty nice deal. We had a slow morning, including another leisurely breakfast downstairs. If I could get Melissa to have a buffet ready for me every morning, well, I would be a happy man. I am really taking a liking to stir fried rice and kale. Of course, I still like dry cereal and toast, but steamed kale just gets me over the hump. We are meeting lots of neat folks as part of this process. There are two other families, also from the U.S., who are also adopting who are staying at the hotel this week. Visited with one of them quite a bit this morning—they are believers from the St. Louis area and just adopted a beautiful little girl to couple with their biological son. It is nice to meet people from a familiar territory when you are far from home. Melissa also talked at great length with a Chinese gal who now lives in Canada with her husband and son. She was so intrigued with Luke and our 7 person contingent that she kept pegging Melissa with “how do you adopt?” questions. After lunch, we loaded up the troops and headed to a nearby park called Green Lake. If you had to guess the color of Green Lake, what color would you guess it to be? That is right, it is green-quite green. I think it is algae, but I am an engineer and not a biologist. We had a great time strolling the park—we stuck out like a sore thumb. Piper was stopped once by a gal so that they could get their picture together. I told Piper that girl may never see another American in her life and she (Piper) was quite the good sport about it. And besides, Piper’s image is probably out on the internet by now on some Chinese girl’s blog. Enjoyed some senior citizens doing what I called a “Chinese line dance” and we all tried to drop coins into a tiny square at the bottom of a very large vase. Bill, Cole, Linda, and Shelby (I think) all hit the square and apparently are now blessed with good fortune. We then spent awhile in a mini-amusement park and gave Luke his first train ride with the Nicholsons. We were getting him prepped for the Pumpkin Festival! We then returned to the hotel and everyone just did their own thing—which for Luke included lunch and a 3 hour nap. We let him nap more because we had big plans for the evening. We did have some adventure as we prepared for our night in that somehow a fair amount of water was leaking through a ceiling light fixture. Thankfully, three very nice Chinese men took care of that situation while two female staff were in and out taking care of other housekeeping items. I mention the two gals because Melissa failed to tell me she had let one of them in. I found out she was in the suite when the gal strolled through while I was changing clothes. That made for a great moment! Embarrassment pretty much transcends all language. We then headed down to load into a taxi van to take us to the Yunnan Dance. Think Tommy Bartlett’s Water Show meets Chief Cloud meets River Dance and you have the right mental picture. Prior to leaving, Luke was throwing an absolute fit—so much so that Linda suggested that she and Melissa stay back with him. We all thought it would be fine. Well, let me tell you that Linda was right. He and I were barely in the theater for 10 minutes before we shuffled to the back to claim the most remote seats available. He then proceeded to cheer and chatter and wave and squirm. You know how I love attention and being hot and being sticky. Well, let us just say that we bonded for 1.5 hours. Actually, he and I really enjoyed the show, which featured singing, dancing, and drumming by local minority groups. As a cultural lesson for the day, I will tell you that apparently there are more than 50 ethnic groups in China—they are all Chinese but are also distinct enough as to somehow be classified by ethnicity. I think the Han are about 70% of the total population and the other 50 or so groups compose the rest of the population. In Luke’s Yunnan Province, there about 25 ethnic minority groups. Several people have told us that Luke’s appearance almost assuredly means he is from one of the minority groups. Judging by his bouncing and waving and joy at the Yunnan Dance, I would tend to think they are right! So, we are almost all in bed. Although, I think Bill is probably on the 21st floor of our hotel enjoying a memory. Did I mention the 21st floor of our hotel actually rotates a full 360 degrees every five hours? We are planning a dinner there for fun, although I do not want to wait five hours to see if it fully rotates. Tomorrow we are going to visit the orphanage. It is apparently a very beautiful, very well supported orphanage, although I expect I will crack when I see so many children just waiting.