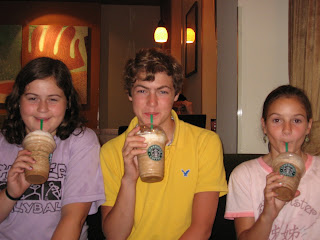 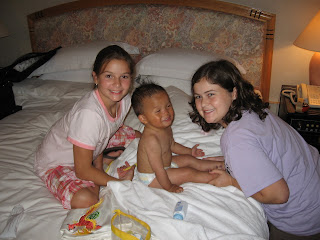 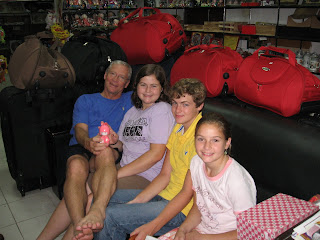 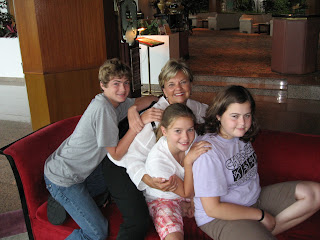 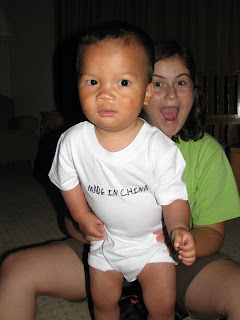 Well, today is our last day in Guangzhou. It is pretty much like Groundhog Day. For the record, I start breakfast with a bowl of cereal—one scoop of granola, one scoop of muesli, one scoop of raisins, one scoop of pumpkin seeds, and no milk—just dry. I chase that with one glass of apple juice and one cup of coffee. If fresh pineapple is available, I then get three slices of fresh pineapple and place that on the same plate as one piece of wheat toast (twice through the oven) and four slices of bacon. Chase all that with another cup of coffee and another glass of apple juice. If I feel especially frisky, then I may have a waffle fresh from the griddle. But, then I think about how I look in my jeans and I pretty much do only half the waffle. Other than that, same breakfast, different Asian city, for the past fourteen days.

After breakfast, we all packed a little more. Cole and I then joined Bill for a bit of exercise. Actually, Bill organized an impromptu squash tournament with another adoptive family. They live in Chapel Hill, NC—the wife from Michigan originally and the father from England. I think they have three kids and had adopted a girl who was like 5 or 6. Neat to get to meet them. They were believers—I think my PCS Athletics t-shirt was the lead-in—so go Crusaders—whoops, I mean Chargers. In the end, it is important to note that the father and sons trounced Bill and me, although Cole did manage to pull off one victory for the family. While we exercised, Linda, Shelby, and Piper went to get their nails done. Unfortunately, it was only the hands, as they were told by the staff “we don’t make the pretty toes”. Fortunately, it was accompanied by a pounding hand massage to go with the typical cuticles and painting. Should a man know how to spell cuticles? Melissa and Luke stayed in the room so he could nap, although it ended up being a short nap for whatever reason. I think Luke knows he has entered into party central and has figured out that sleep is for the weak.

At 2:50pm Melissa, Luke, and I went downstairs to meet the other adoptive families to “go take the oath”. So, we loaded up on a bus that took us on about a 30 minute ride to the U.S. Consulate. In my mind, I envisioned an embassy with guards and flags and the like. In reality, it was the fifth floor of a uptown office building. There was security and x-ray but it was not as magnificent as I had dreamt it to be. Basically, Melissa and showed our passports to get into the Consulate. They then handed us copies of our passports (Dave and Missy from US and Yi Duanlu from China) that we then showed to nice man behind platen glass. He validated we matched our paperwork and sent us back to the large waiting area. A super fun guy named Rich, a US citizen who works for the consulate, then came out, introduced himself, read off the list of states represented by all the 50 or so families in the room, and said “Here is the moment you have been waiting for”. He then proceeded to read a one line statement to the entire room that basically said “Do you affirm that all the information you have presented . . . is true? . . . if so, say “I do”. We all said “I do” and the room filled with applause and one of my eyes, the left one I think, filled with tears. So, Luke becomes a US citizen when he lands in Chicago and we hand a sealed brown envelope to a US immigrations officer. We loaded back on the bus and were to the hotel by 5:30.

So, I have no idea what Bill, Linda, Cole, Shelby, and Piper did while we were gone. I know they had a late snack and then went out for a little shopping. I know that because I saw the bags when they returned. I think they also did a mini-photo shoot around the hotel and the island. I think they were inspired by the many instances we saw during the week where camera crews were out doing spreads for magazines using the hotel and island as the backdrop. Hopefully, the photos posted tonight help fill in the blanks.

Some of you have asked for return trip details. First, we leave the hotel and travel to the Guangzhou airport. We fly from there to Hong Kong. We then climb on United UA 896 that leaves at 12:45 pm (HK time) and arrives in Chicago at 2:20 pm (CST). In Chicago, we climb on United UA 5961 that leaves 4:53 pm (CST) and arrives Peoria at 5:48 pm (CST). Pray for safe travels, a restful flight, and that intestinal issues—which are kicking in—remain manageable for all parties.

Some have asked, “Will the blog continue?” Well, I for sure will post one more time just to express thanks, let you know that we are home safely, and share with you any good travel stories. Beyond that, I promise little because it is time to return to the real world. Thanks for making the past two weeks extraordinary for our family.